The selection period lasted for a few months. In that time, the coaches ran three separate camps - one in Dusseldorf, one in Berlin, and the other in Ulm - and from the 100+ players who tried out, they selected 41 going forward into the next stage of the trialling process.

‚The standard of these camps was excellent, and we are very thankful to everyone who came and tried out for the team!‘, Matthew Bagley (Head Coach) said as representative for the men’s national team’s coaching staff.

However, the coaches are very excited to begin working with the members of this 41 man training squad after the German domestic season is over in June. The selected players will have three sessions over the summer, and then the coaches will choose a final roster of 23 players (with 4 alternates) that will be taken to represent Germany during the 2016 European Championships in Budapest, Hungary. The staff and the DLaxV wish everyone the best of luck going forward. 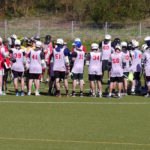