[widgetkit id="47"]
The first closed men’s national team camp took place on the weekend of the 10th and 11th of October at the Giesewiesen in Kassel. This camp was special since the focus was not just on player performance but also giving back to the city of Kassel and making a statement on the biggest current news topic in Germany; refugees.

Especially in the last few months, thousands of people have collected what little they have and tried to escape war, poverty, and hunger. The moving refugee stories that we have heard and read about lately have encouraged our Men’s National Team to make a strong statement and do something to improve the quality of life of our fellow human-beings.

The police drop off about 60 refugees per month in Kassel. These people are on the move, many to Sweden for example. Some end up staying and going through the asylum process in Kassel, which takes up to 3 years. At the moment, Kassel cares for about 200 UMFs (unbegleitete minderjährige Flüchtlinge / minor refugees without family). The average age is about 16 years of age. 90% are boys. The Youth Welfare Service (Jugendhilfe) is responsible for these teenagers. There are many reasons these kids are fleeing their countries of origin: war, poverty, religious oppression, and sexual abuse. They can pay up to €5000 to make it abroad. 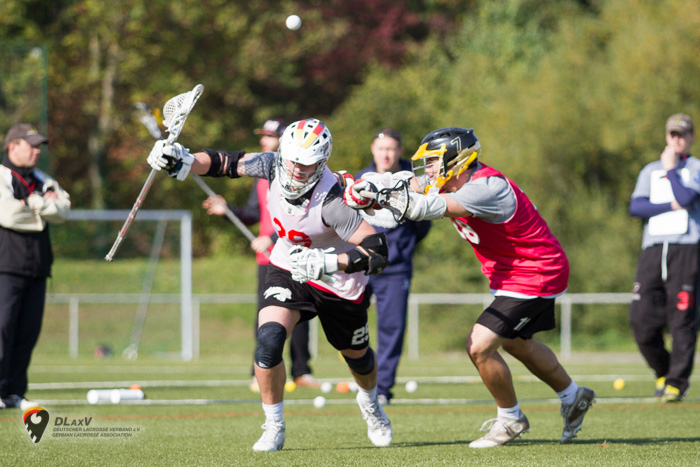 Enforcing the game on the offense: Dominic Schüler is defended by Moritz Spiegel

he players went through a five hour training session from 10am to 3pm. Over and over, the team was split up into small groups for drills suited for their specific positions. Above all they practiced fast and smart decision making in very limited spaces. In the process, the guiding principle of the national team was reinforced: to call all the shots on the field and enforce their game on their opponents.

After a short but reviving snack, the program went on with the arrival of the refugee kids from Eritrea, Afghanistan and Pakistan who looked at the lacrosse field and its players skeptically at first. However after just a few minutes, the initial timidity turned to interest as the team and the staff welcomed the youths. After a short photo shoot by the local and DLaxV press it was time to learn how to use a lacrosse stick. 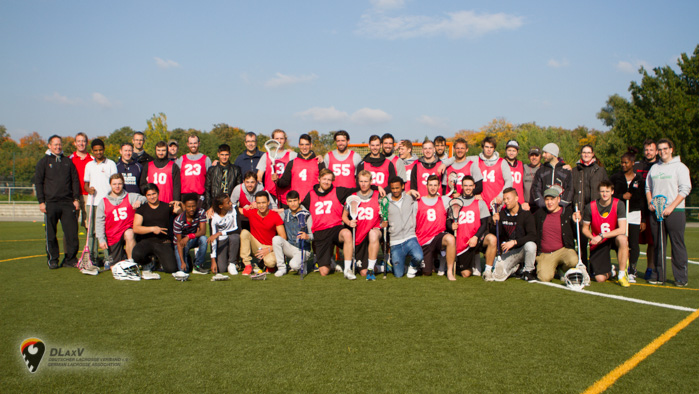 Refugees, caretakers, players, staff and board came together on Kassel's turf on Saturday

The kids first learned to pick up a ground ball followed by an introduction to lacrosse equipment and to the passing technique. Every refugee kid was assigned to a national player and they got to know each other while trying to pass the ball. Orchestrated by Wolfgang Grießl, Moritz Spiegel, Matthias Lehna and Jan Fooken, small groups were built to do some competitions and fun games to repeat the skills learned in the drills. Once they had mastered the basics, it was finally shooting practice. Although they did not score with every shot, they didn’t miss a chance to test our goalies and have a lot of fun running across the turf with a stick in their hands. This spirit was shared by our national team which also had fun showing the girls and boys living in Kassel how to play lacrosse. Especially with the trick shot competition. As a souvenir the 25 youths received T-shirts sponsored by Captain Lax . 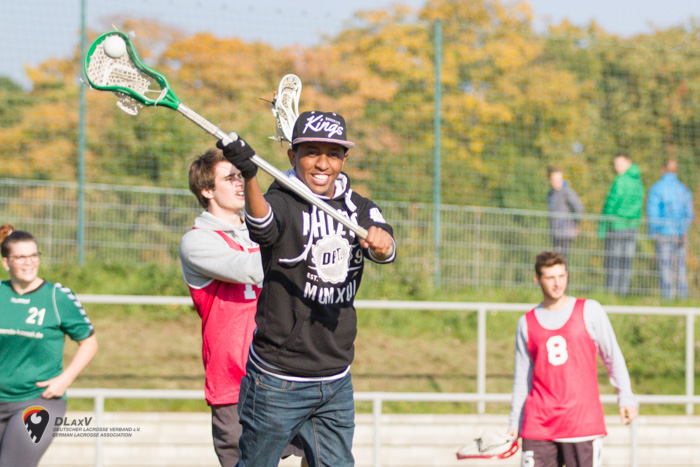 After a short introduction it was time to pass with a lacrosse stick for the first time.

„The kids are having a blast playing lacrosse,“ head coach Matthew Bagley said happily, „Some of them are doing really well with their sticks and its great to see my players so motivated.“ Bagley and the DLaxV are proud of the Mens’ National Team and their commitment to young refugees. A collective cheer ended the sports program and players, kids and staff were invited to join a BBQ next to the field. The kids’ caretakers from the Jugendhilfe Kassel, Margarete Fischer and Jonas Schade, as well as other city officials experienced lacrosse for the first time, too, and did not hesitate to try out a lacrosse stick. 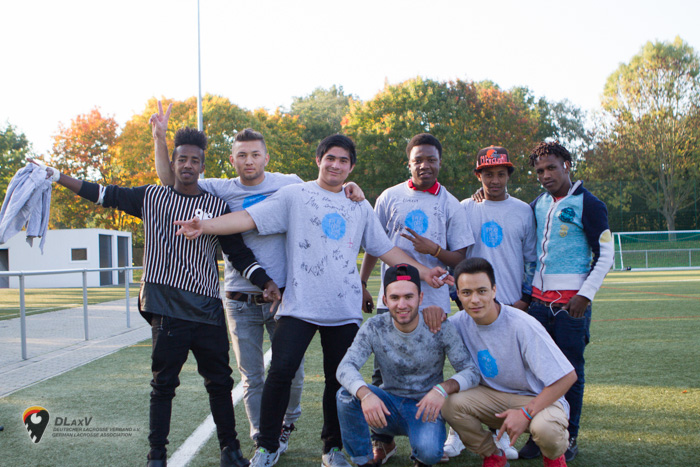 Some kids took their chance to get some autographs from our national team.

The Director of the Kassel youth program, Henning Wiedefeld was very satisfied. „Sports are the integration method of choice and by far the most effective. We are very pleased with the great outcome of the cooperation with the national team.“ 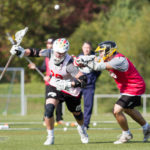