My name is Jesse Cracknell, and since Germany’s first participation at international indoor lacrosse tournaments, I consider myself lucky to have been the head coach of the national German indoor team.

Since 2015, I have had the pleasure of meeting and competing with German lacrosse players from acrosse the country. I have been fortunate to experience first hand the growth in the game, and have a front row seat to the massive improvement that German indoor lacrosse has shown. This has been a great privilege. 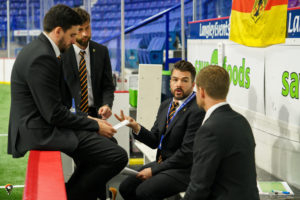 That national indoor team is truly something special. For those who have never been involved, ask those that have. Since the World Championships in 2015, this team has seen tremendous growth. In addition, they have competed against international competition that has been stocked full of Canadian, and American professional and semi-professional players. In many of these cases, Germany has won these battles. In those that we have not - we have left a mark. Teams that are full of North American players, and NLL stars know that when they suit up against the German team - they are going to be pushed to their limit, both in skill and in fitness. Our team has an identity, and it is tough to beat.

The team plays tough defence, methodical offence, and has a transition game that is as (or more) productive and dangerous as the best teams in the world. If you watch any of our games from the EBLC in 2017, or the WILC in 2019, you will notice that our opposition usually takes a timeout at some point in the second quarter for what appears to be no reason. However, there is a reason. They are exhausted. They need a break. They need to collect themselves. If they plan on hanging with the intensity and speed of the Germans - they are going to need a break before half time to do it. This is an awesome team to be a part of.

In 2021, Germany will be hosting the second ever European Box Lacrosse Championships (EBLC) in Hannover. We will look to improve upon our loss in the bronze medal game at the 2017 EBLC in Finland. Pardon my language, but this is a big f***ing deal. I believe that it should be the goal of our team to win this tournament. We are a team that is trending in the right direction, at the right time. We have more depth, more talent, and more experience, than we have ever had. There is enough talent, athleticism, and character in Germany to get this done - but we need everyone. This is the point… we need you.

I will always be honest with you as a coach, and I will be honest now. One of the most frustrating parts of coaching this team internationally, has always been the amount of talent that we had to leave home. Selfishly, I want to and I expect to win every game - I have a bit of a complex here. What I want even more though, is to show the world what German lacrosse is. I want the world to see just how good this country is at lacrosse, and the level of skill and athleticism there. I want to win the EBLC, in Germany, so that the country can experience the game first hand at it’s highest level and see how amazing the German lacrosse machine is and also what it could become. To do this… we need you.

I am asking for anyone and everyone interested to get involved with box lacrosse now, and plan on trying out for this once in a lifetime opportunity of wearing your countries colours in an international tournament at home. I want you to have the opportunity to do that in front of your family and your friends. Most of all, I want you to have the very real opportunity to win the damn thing in front of everyone - so that when the final whistle at the EBLC 2021 in Hannover is blown, the German flag will raise. 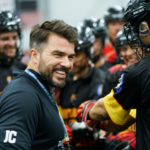