I wanted to write a letter to all womens DlaxV teams and members at this time; first to congratulate all those Players/Teams that have participated in this very successful season. The numbers of players have been increasing across Germany,as new clubs pop up and current ones grow. The level of play has also increased, which has provided more balance and better games. I must add a special congratulations to DHC Hannover, HLC Rot-Weiß München, HTHC Hamburg Warriors, and SCC Blax for making it through to Championships weekend. I am looking forward to seeing each game as the brightest stars of German lacrosse get to be showcased. Thank you to the Dresden Lacrosse Club for hosting a great event at a fabulous location.

I wanted to also give everyone a full outline for the selection process running up to the European championships.

Taking into account for this past season's work and two open camps, the National Team Coaching Staff, selected its first team for a friendly to be hosted on June 19th in Berlin against the Dutch Development Team. This game will start at 8:20pm, at Stadion Lichterfelde. Congratulations to those names on this list below.

Along with this team being named the coaching staff has chosen a captain, Tessa Helf, who will lead the program as it moves forward in preparation for the European Championships. Tessa has show great leadership throughout the first open camps and her club season. We as a coaching staff are very excited about her future with the National Team in this role.

We will have one more open camp on the 23rd & 24th of August in Frankfurt. This camp is open to all members of the German lacrosse community. I strongly encourage all those interested in the national team program to attend this camp as this will be a great place to showcase your talents.

The following camps on Sept 27th & 28th, Nov. 8th and 9th, and April 3rd -6th will be invite only. These invitations will be sent out to players that have caught the attention of the coaching staff either from a camp, a club match, or at a major lacrosse tournament. After the April 6th camp the coaching staff will put together a 25 player roster for the European Championships in August 2015 in prague. A development team will also be chosen with the goal to continue training in preparation for the World cup in 2017. These two team will come together in May on the 14th and train through the 17th.

More camps and friendlies will be announced as we start to schedule things the DlaxV Calendar will be updated.

Bids for each camp are now being received please email me at Robert.novorolsky@gmail.com if your club is interested in hosting a National team camp.

The Womens National Team Program is also putting on camps all across Germany on October 18th to give others the opportunity to get coaching directly from the National Team players and coaches. Again if your club is interested in having a clinic from a group of National Team Players please email Robert.Novorolsky@gmail.com

Thank you for reading this letter please let me know if have any questions or concerns about the program as it grows. Below is an alphabetically ordered list of those that will be putting on the Germany Jersey June 19th in Berlin. 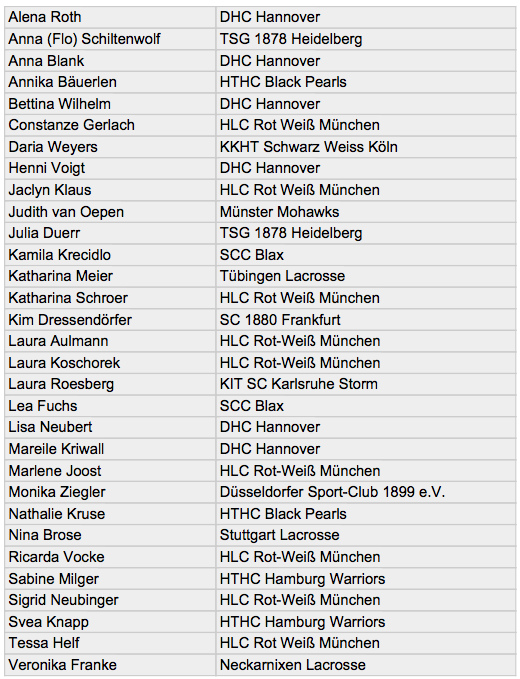 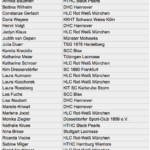